Right To Play in Tanzania

Right To Play began working in Tanzania in 2001 to address the challenges facing refugee communities. Since then, we have expanded our programs to support government efforts to tackle issues of poor educational quality, lack of child protection, and gender inequality facing children and communities in Kigoma, Pwani, Mara and Morogoro. We use a robust partnership approach and work closely with key government institutions, local officials, civil society organizations and networks, communities, teachers, parents and children themselves.

In 2017, Right To Play’s technical assistance to Tanzania’s Ministry of Education reached a critical milestone. More than 800,000 pre-primary students across the country began the school year with a teacher who had been trained in play-based learning, and provided with a Play-Based Learning Pre-Primary Teacher’s Guide. As the result of a close partnership between Right To Play, the Tanzania Institute of Education and the Global Partnership for Education, more than 16,000 pre-primary teachers in Tanzania have been equipped to deliver the pre-primary curriculum using play-based learning.

The challenges faced by children in Tanzania

Tanzania aspires to reach middle-income status by the year 2025, and has made important commitments to human development, including a commitment to providing free compulsory basic education for all children. While Tanzania has made progress towards this goal, including the achievement of gender parity in primary education, there remain significant disparities in access to quality education for children based on where they live, their socio-economic status, and whether they have a disability or are a refugee.

According to UNICEF, 23% of primary school-aged children in Tanzania are out of school. Furthermore, by the end of grade 2, only 12% of students could read Kiswahili with comprehension. Only 30% of schools have basic provisions for sanitation. With over-crowded classrooms and a shortage of qualified teachers, the education system is not yet able to equip all children with the skills and knowledge they need as resilient citizens of the 21st century.

Tanzania has been commended for the creation of a comprehensive National Plan of Action to End Violence Against Women and Children, responding to harmful traditional practices that deprive girls in particular of equal opportunities. Tanzania has one of the highest early marriage prevalence rates in the world, and while female genital mutilation/cutting rates declined by one-third between 2005 and 2015, it remains a common practice in rural areas.

A Tanzania Demographic and Health Survey found that close to 27% of girls aged 15 to 19 have already given birth or are pregnant with their first child. 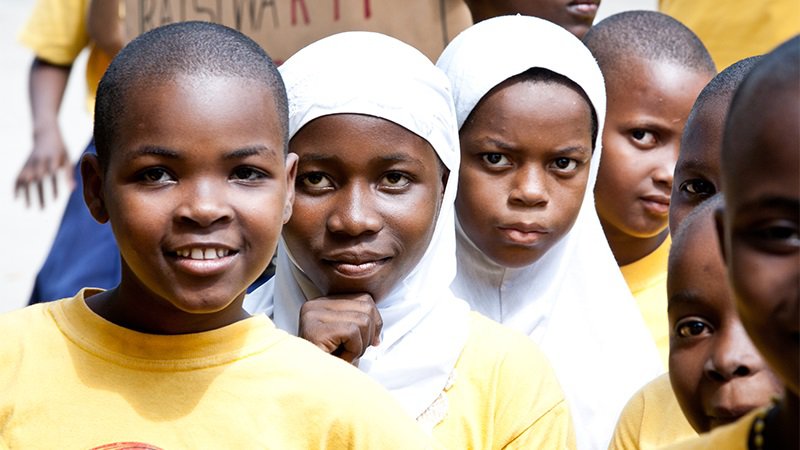 Right To Play works in partnership with the Tanzania Institute of Education to support teachers, supervisors, and other district officials to enhance the quality of pedagogy at the pre-primary and primary levels of education.

Our comprehensive in-service teacher training program has been designed in alignment with the national curriculum to enhance teachers’ use of child-centered, active learning approaches, as well as their ability to create positive, inclusive, and gender-responsive learning environments. We train quality assurers, district academic officers, ward education officers and selected teachers on how to train other teachers on play-based learning. They are supported by district officials who have been trained on how to use coaching and mentoring in a supportive supervision approach.

We also support teaching practice by providing teachers’ guides, model lesson plans and videos, and learning and reading materials. In 2020, Right To Play began to place additional focus on early reading, supporting the capacity of teachers to use play-based approaches to promote early literacy, and working with parents and communities to provide supplemental opportunities to read. 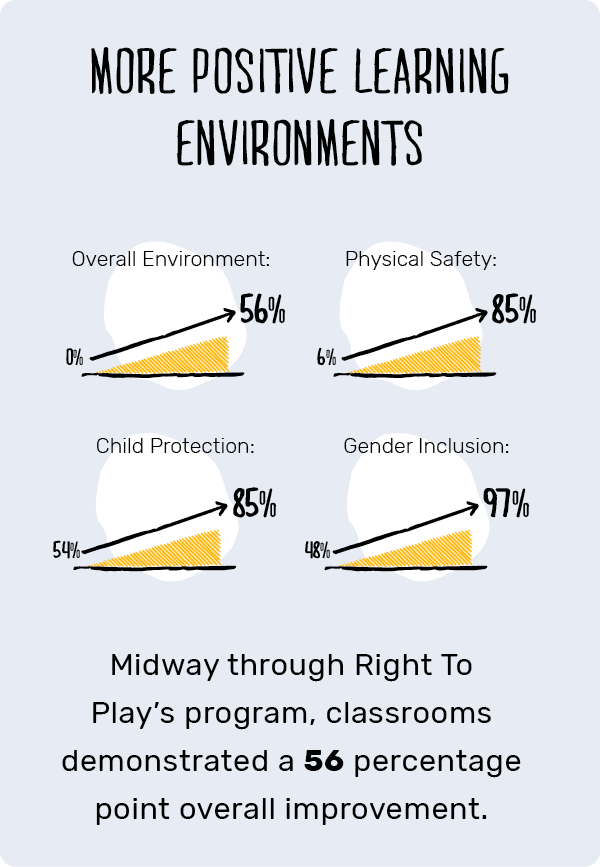 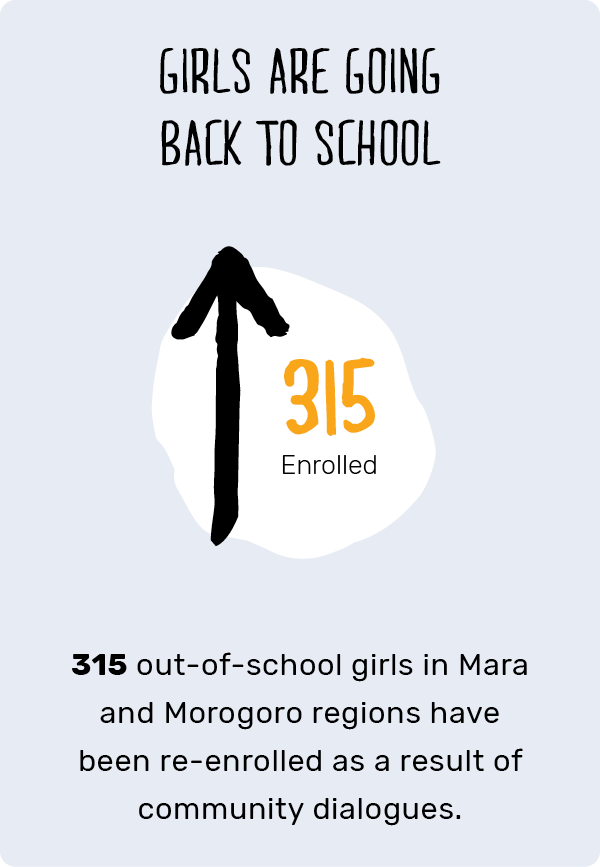 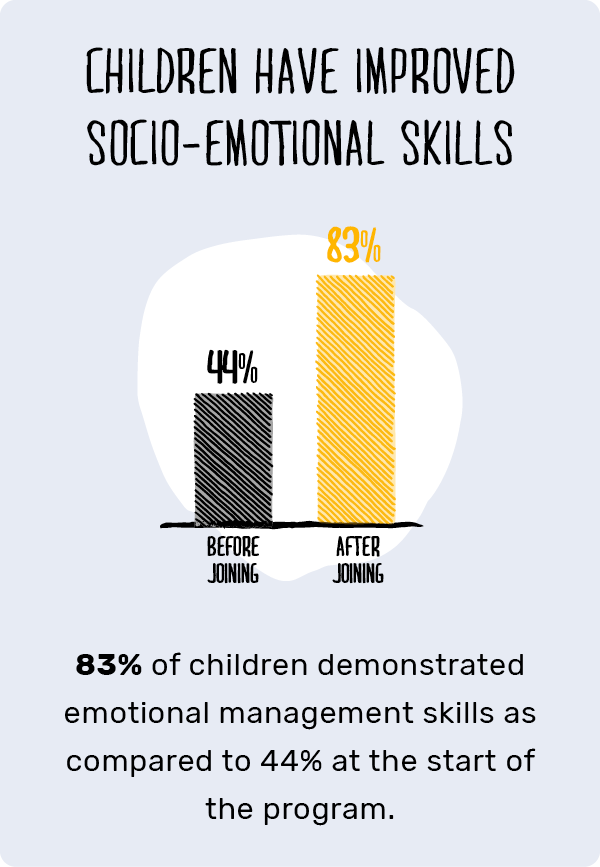 “Play-based learning has given teachers new and different strategies for teaching. Teaching using games is done in a friendly, non-threatening environment, and has reduced corporal punishment. The program makes students creative, builds their confidence, promotes cooperation, and develops their capacity of thinking. Games and play motivate youth to attend school, and reduces absence rates. The fact that boys and girls are treated equally contributes to the removal of gender discrimination and promotes gender equality and inclusion.” — District education official

Right To Play works with schools and communities to empower girls to be leaders and to make decisions about their education through the establishment and strengthening of student clubs in schools and communities. In addition to training teachers on how to support child-led activities in the school and community, we teach children, particularly girls, about gender equality and child protection, how to use games to facilitate the development of life skills in their peers, sexual and reproductive health and rights, and communication and advocacy. In 2020, Right To Play expanded this work to include girls in Nyarugusu and Mtendeli refugee camps, in collaboration with the Norwegian Refugee Council. 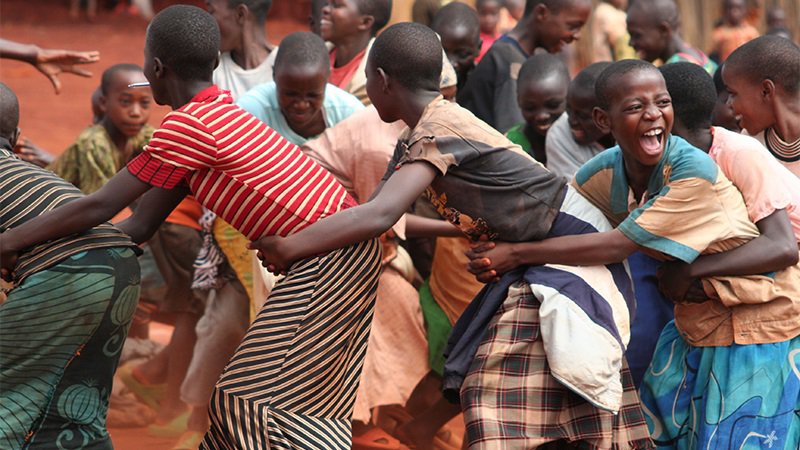 Addressing the barriers that limit opportunities for children

Right To Play works closely with community-based organizations and other community partners to address the norms and beliefs that act as a barrier to education, particularly for girls and children with disabilities. We organize sporting events and Play Days that bring community members together to share messages about the importance of education for girls, and to highlight the negative effects of harmful traditional practices.

We also work with community partners to identify out-of-school children of primary school age and support them to enter school. We complement community-level work with partnerships that aim to make schools safe and inclusive. These partnerships help to strengthen child protection referral mechanisms, increase accessibility through physical rehabilitation, and monitor the learning experience of former out-of-school children to support their successful integration into formal education. We also focus on the rehabilitation to ensure that girls, boys, and children with disabilities can access appropriate facilities, including dedicated change rooms for menstruating girls.

Stay connected to children in Tanzania

Right To Play gratefully acknowledges the support of all of its financial and technical partners. Support for our programs in Tanzania comes from the Government of Canada, The Lego Foundation, NORAD, The Bill Volk Celebration Golf Classic, The Accuro Trust, SDC, the Isle of Man Government, and many others, including supporters like you.

More info on our work in Tanzania