Early pregnancy and child marriage were once common in Xai Xai, a bustling town in southern Mozambique where forty-four per cent of the population is under 15 years old. Across Mozambique, it’s common for children, especially girls, to drop out of school prematurely, marry and begin raising families before they are 18.

Child marriage is illegal in Mozambique, but it’s also widely accepted. In one of the poorest countries in the world, it’s expected that husbands will give a dowry to the family of their new wives, and young women command the highest prices. Once married, they drop out of school and live with their husband’s family. Often they are expected to serve as free labourers for this new family.

Few people know about the risks of early pregnancies to both mother and child, and almost no one has access to the medical care needed to deal with them. That means Mozambique has high mortality rates for both newborn babies and their young mothers: it is one of the 20 most-dangerous countries in the world to become a mother.

MOZAMBIQUE HAS THE 9TH HIGHEST RATE OF CHILD MARRIAGE IN THE WORLD.

But in just the past five years, the town of Xai Xai has seen incredible drops in the number of children who are being married off, becoming pregnant, or dropping out of school. The drop has come as parents learn more about the risks of child marriage and early pregnancy, and the profound impact of denying education to girls. 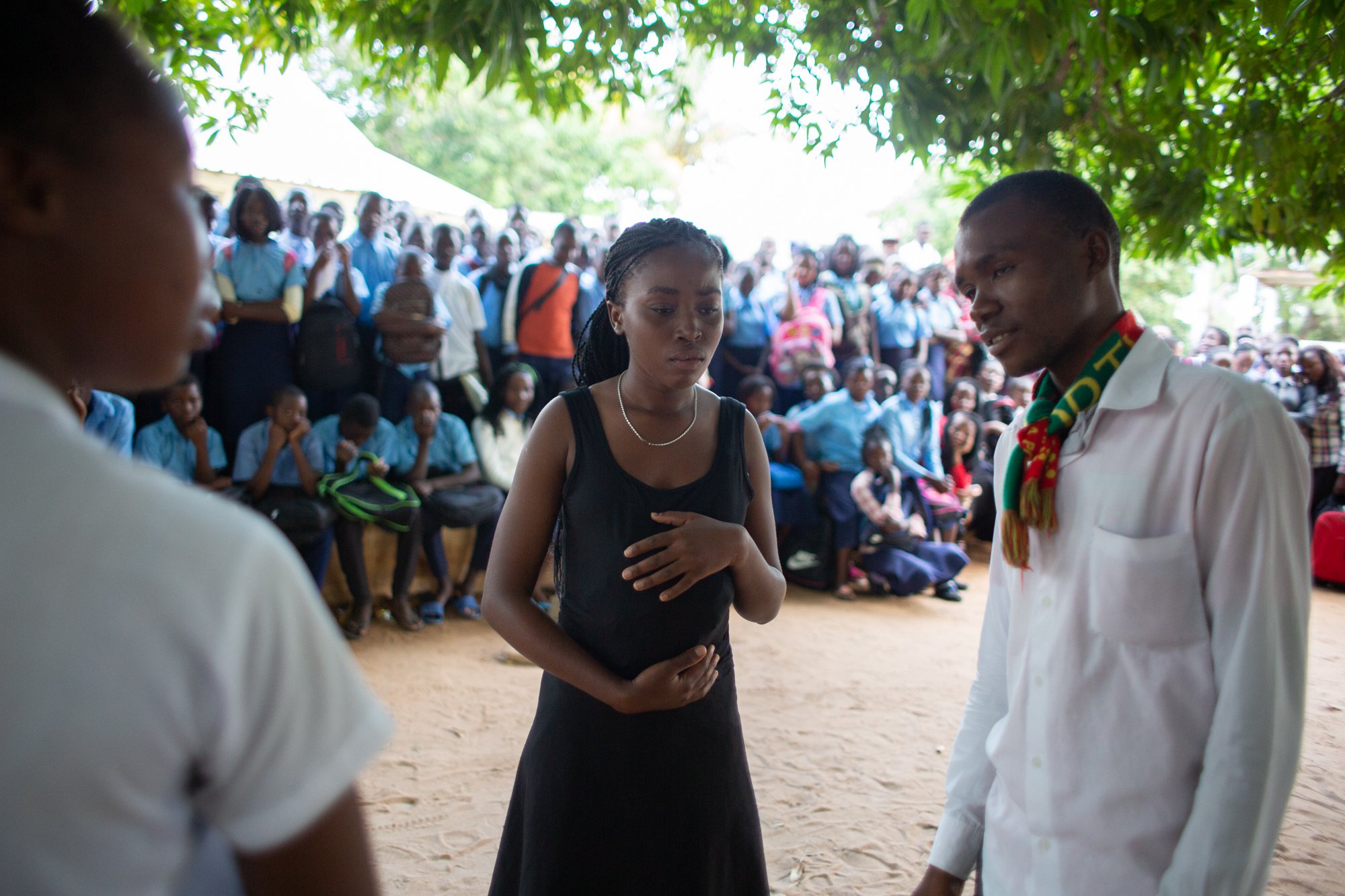 The change is thanks to the tireless work of 19-year-old Aurora and her friends in the local Right To Play Child Rights Club. These incredible young people have been running a drama group that has radically changed how people in their hometown think about these issues.

40% OF GIRLS IN MOZAMBIQUE BECOME PREGNANT AT LEAST ONCE BY AGE 18.

Aurora and her friends joined their local school’s Right To Play Child Rights Club seven years ago, when they were just twelve years-old. In the club, they learned about their rights and how to advocate for them using the power of theatre. They learned how challenges facing children in Xai Xai could be turned into stories that would move the hearts of parents, peers and elders.

The children began writing, producing, and acting in plays and shows that address issues like marriage, pregnancy, gender-based violence and difficulties with school. Each performance is tailored to the specific audience, with different focuses and ways of presenting depending on whether they’re speaking to elders, peers or a mix of the two. The plays are engrossing and relatable, and they’re written to engage the audience and inspire their active participation.

THE DROP-OUT RATE FOR PRIMARY EDUCATION IN MOZAMBIQUE IS 66.8%.

While the interactive, entertaining nature of theatre allows the youth to communicate about difficult and sometimes controversial issues, it also allows the audience to safely explore new ideas. The community are brought in as co-creators and each performance galvanizes the community, sparking conversations and debates about the future of young people that echo across the entire town. 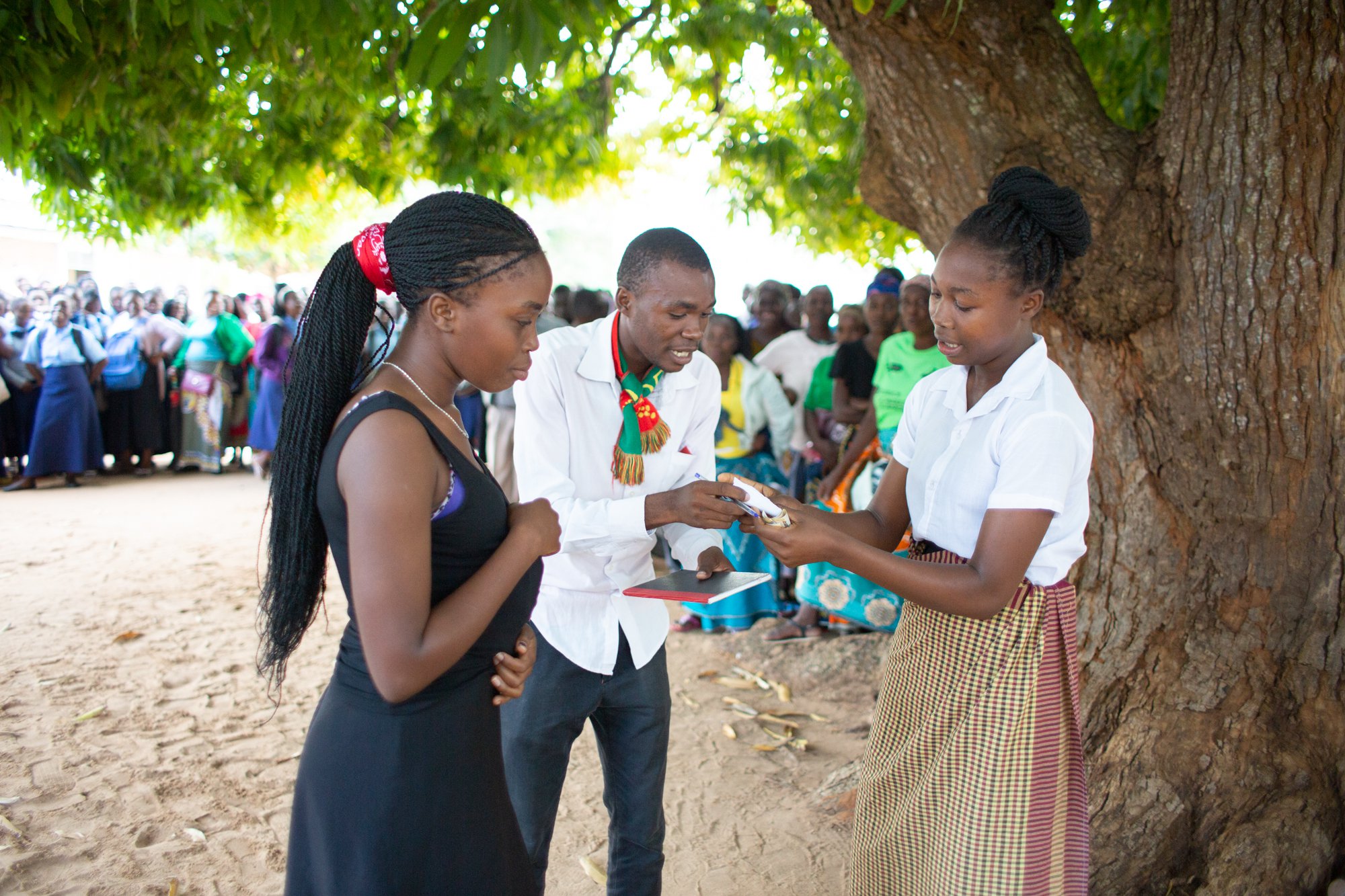 Aurora, Raimundo and Flora, members of the drama group, in a scene where Aurora portrays a pregnant teenager visiting a medical clinic for advice.

Aurora first found the power of her voice in the Right To Play Child Rights Club. She takes particular pride in how their shows inspire young people to stand up for their rights. Some of the most frequent topics featured in their plays are contraception and sexual health, the health risks of early pregnancies and the heightened risk of domestic abuse that child brides face.

"EARLY PREGNANCY AND MARRIAGE HAS BEEN REDUCED SIGNIFICANTLY…BEFORE THE GROUP IT WAS VERY HIGH.” – RAIMUNDO, DRAMA GROUP MEMBER

Even publicly addressing these issues was a shock at first to the older generations in Xai Xai. Parents and elders didn’t speak about them with one another, let alone with children! These issues had never been openly discussed until Aurora and her friends began telling stories and sharing their own, child-created, solutions to them.

Because the older generation rarely, if ever, spoke about these issues, young people didn’t have anyone to learn from.

Parents and elders are learning and changing their minds thanks to the drama group.

Aurora takes pride in how she is teaching the town elders, because as their knowledge has increased, so too has their support for stopping harmful practices and dismantling the barriers that hold children back. Parents support their daughters staying in school instead of trying to marry them off. Now that they have a better appreciation of the risks, they are breaking with the old ways and creating new traditions to safeguard their children’s futures.

“We see changes in the community,” says one parent. “There is change and if they keep performing it will keep changing. We did not have this knowledge at this age. This knowledge is changing us.”